Cleaning, disinfecting and maintenance is performed on site as the fish cage can lift itself completely out of water.

Keeping sea lice out and salmon in.

The water replacement system and the deep lice skirts provide a positive aquatic environment in the fish cage. Oxygen-rich water is pulled in from water depths with minimum sea lice and algae, and circulated in the cage. This is expected to improve fish health, increase growth rate, lower feed factor, improve colouring and produce firmer fish fillets.

During the development project, the production in Aquatraz was analysed and compared to conventional net pens with lice skirts and Midt-Norsk ring at the same site. In the last production cycle that was analysed, the conventional control cage had 5 rounds of delousing, while Aquatraz had no need for delousing.

Protecting the farmed salmon form escape and securing abundant supply of deep water, facilitates a substantial increase in the fish stocking density. An Aquatraz research programme in 2019-2020 monitored the effects of increased fish stocking density up to 30 kg/m3, and found no negative effects on water quality nor fish welfare.

The raiseable steel structure with wide walkways and handrails provides improved working conditions with less heavy lifting, and decreased reliance on support vessels. Aquatraz has a design life of 20 years with low operating and maintenance costs. The fish cage has a lifting system ensuring that the cage can be lifted out of water for cleaning, disinfecting and maintenance on site.

During the development project, farmer Midt-Norsk Havbruk (now SalmoNor) have produced 6.348 tonnes of salmon in Aquatraz cages. The production cost in Aquatraz, including depreciation, have consistently been lower compared to the convetional control pens. In the last analysed production cycle, the margin of profit in the Aquatraz cage was more than 4 NOK/kg salmon larger than in the conventional cages  (appr. 0,33 GBP/kg), with identical fish stocking density in both cages. Utilising the possibility of incresased fish stocking density in the Aquatraz cage would further lower production cost per kg salmon. As would utilising the alternative production model described below.

An financially efficient way to utilise one Aquatraz, is growing large smolts from about 0.4 kg to 2 kg in Aquatraz in the first 6 months, then move the salmon over to conventional net pens for another 6 months until slaughter weight. See the illustration below. The goal is production with no need for delousing. In Norway a rule of thumb is that both direct and indirect lice costs totals to approximately NOK 10 / kg salmon (c. 0,85 GBP/kg). One Aquatraz and several net pens allows for a total yearly production of 5.000 tonnes, saving approximately NOK 50 million per year (4,3 million GBP). These are approximations with round numbers, and 6 months of lice-free production in open cages is not guaranteed, though it is likely. Delousing after only 6 months in conventional net pens is unusual. Starting with 500.000 smolts in Aquatraz is a low number that can easily be increased. 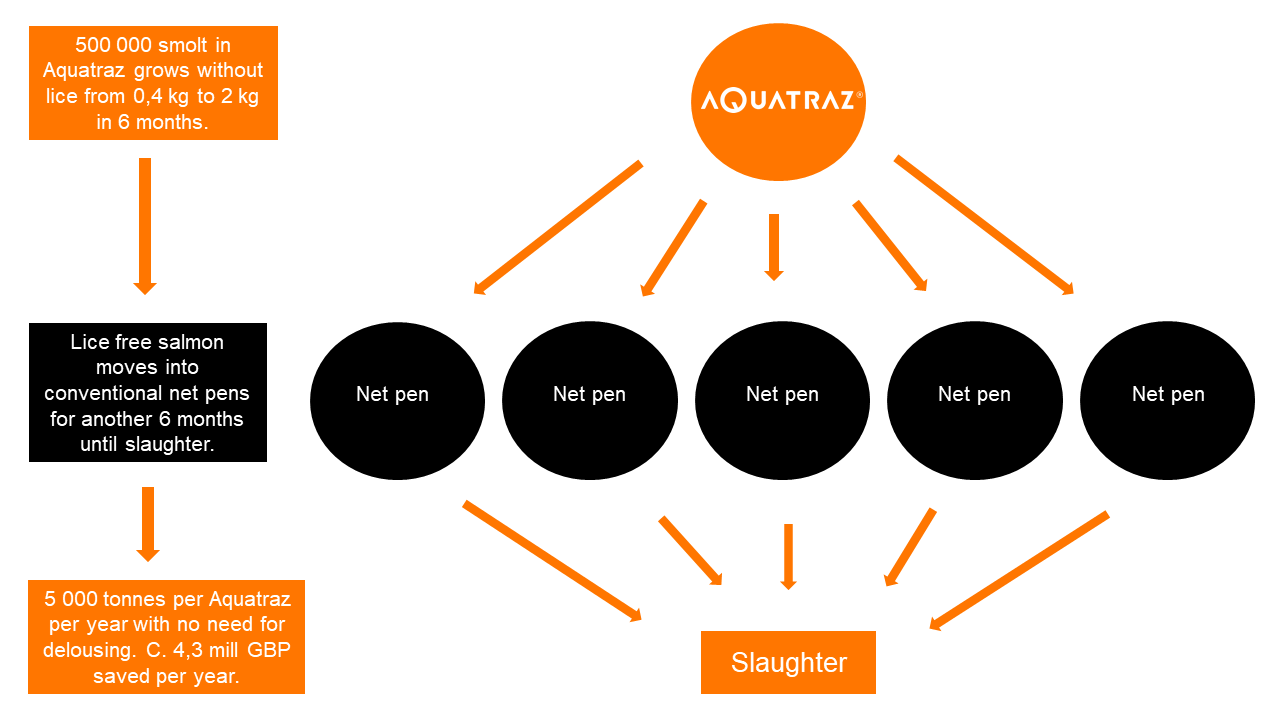 The fourth and last generation in this development project tested out a new patent pending method for water exchange  (salmonbusiness.com),  This is expected to contribute to an even lower energy need in Aquatraz and may result in Aquatraz becoming a net producer of electricity.

Photos from the Aquatraz development project